History Ballincollig (Irish: Baile an Chollaigh) is a satellite town in Metropolitan Cork about 8 km west of Cork city in County Cork, Ireland. It is located beside the River Lee on the R608 regional road. The nearest towns include: Ballinora, Ovens, Killumney, Inniscarra, Blarney (home of the Blarney Stone), and Tower. It is near the Cork suburbs of Bishopstown and Wilton.

The Barrett family (alter whom the barony which contains Ballincollig is named) built Ballincollig Castle during the reign of Edward III. The castle was taken from Andrew Barrett by rebels in 1641, but they were expelled by English Parliamentary forces under Murrough O’Brien Earl Inchiquinn, in 1645. 1t was garrisoned for James II in 1689, during the Williamite war in Ireland, then remained unoccupied after his defeat, and fell into decay.

The Ballincollig Royal Gunpowder Mills were opened in 1794 by Charles Henry Leslie, a prominent Cork businessman. Eleven years later, the mills were bought by the British, who were preparing for war with Napoleon, and the barracks were built to protect the supply of gunpowder. In 1837, the mill employed several hundred workers, and by 1880, Ballincollig was one of the largest industrial establishments in Cork, with the mill employing many men and boys from the area. 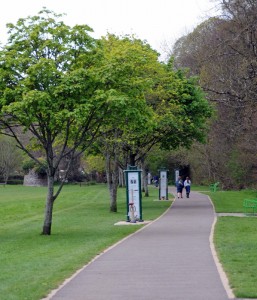 The Gunpowder mills has reopened as a beautiful amenity area and heritage centre and is now just as important an element of Ballincollig as in the past becoming a much loved tourist spot.

Ballincollig has changed rapidly over the past ten years. The community has rapidly grown to a population in excess of 20,000 people at present. The town has 2 second level schools and a range of economic activities with a strong employment base. The community of Ballincollig are hugely involved in sporting activities of all kinds GAA, Rugby, Soccer, Gymnastics to mention a few. Since 2010, the town now hosts their very own St. Patrick’s Day Parade.

The Ballincollig bypass added a huge benefit to the town making Ballincollig an easily accessible destination. The town centre is a now a very vibrant area and hosts a range of Shops, Restaurants, Supermarkets, Farmers Markets, Banking, Hotel, B&B’s, Shopping Mall and much more.